Spring time in this region means Onion Barbecue  time or in Catalan ‘Calçotada ! Yeah you heard right Grilled Onions and they are delicious. It is one of the most renowned Catalan traditions –  a gastronomic phenomenon in the region surrounding Barcelona and further north in French Catalonia. No calçotada is complete without the typical sweet char-grilled spring onions known as ‘calçots,’ and mountains of grilled meat and sausages. Add some red wine to help wash it all down and you have understood the basics.  It is a festival celebrated in the coldest months of the year. From January until April, many towns and villages host these winter food festival. Dinner Dancing and Red Wine How could you beat it? 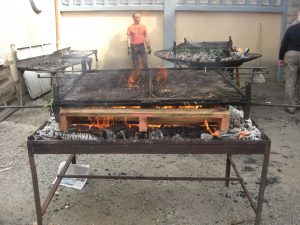 The Calçotada starts with the barbecue. No fancy charcoal here – just scrap timber, old pallets and some vine cuttings. The calçots are placed in wire grills.  When the fire  is ready, it’s time to cook the calçots. They stay on the heat until they are nicely charred and just starting to turn black on the outside. They do not look too appetizing at this stage! Once they’re cooked, they are wrapped in newspaper, just like Fish & Chips, and then kept in a box and left to rest for about 40 minutes. This leaves just enough time to grill the meats, often lamb or local sausages which are typically served after the calçots as the second course of the meal.

This is the star of the show. The calçots are served with a sauce similar  to romesco sauce. I googled it and discovered that it is usually made of a combination of almonds, hazelnuts, stale bread, garlic, ñora peppers, ripe tomatoes, olive oil, and sherry vinegar. It is to die for! We asked for the recipe but were emphatically told that it was a closely guarded  secret. No amount of persuasion worked to change their minds.

Eating the Calçots is a messy operation so gloves and bibs are supplied! Not one for the fashion concious.  You peel the blackened skin of the onion revealing the juicy tender inners, dip in the special sauce and eat and eat. They are slightly addictive! Dont worry – they will serve until you can eat no more and of course copious amounts of red wine. 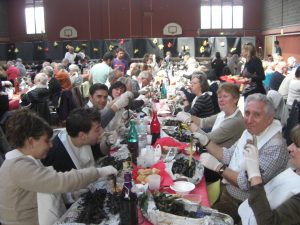 After you can eat no more onions, the tables are cleared. The next course is served – in our case local Catalan sausages and black pudding made and supplied by Chez Alex Charcuterie in Ollette. This was followed by a local cheese and a slice of cake.

Then the dancing begins. Buoyed by the booze the floor is packed. and of course we must have the typical dances of the region – the Sardane.

Our Calçotada was in Vernet les Bains and afterwards they served a potent rum punch. There was eight 1.5 litre bottles in it. I counted!!!! The gentleman making it was a real character. He really loved the attention and what resulted was a long and fun preparation and commentary to boot! After our very fortified digestive we made our way home.

A few Local Calçotadas to come this year:-

Check your local press for more details on
Calçotadas near you

The widgets are not configured. Click here to go to your admin screen and configure them.